Detail of metallic structures designed by architect Calatrava. 1
Santiago Calatrava
It was and finished in 1998 for the Expo '98 world's fair in Parque das Nações, where it is located.

Gare Do Oriente Station is part of the Parque das Nações area of eastern Lisbon. The modernist station building was designed by the leading Spanish architect Santiago Calatrava and was completed in time for the 1998 Lisbon Expo. The station is particularly impressive when illuminated at night.
The station includes a subway station on the Linha Vermelha Line and a suburban train station on the Azambuja Line that has connecting trains to Santa Apolónia, Alverca, Vila Fraca de Xera and Azambuja.
The Sintra Line connects Gare do Oriente with Roma Areeiro, Entrecampos, Sete Rios, M. Abraão Campolide and Sintra.
International rail services to France and Spain also stop at Gare do Oriente - see Santa Apolónia for full details as well as trains to the Algarve.
Gare do Oriente is also a major bus terminus with services to Lisbon Airport (#44), Evora, Setubal, northern Portugal including Guimaraes, Fatima, Coimbra, Abrantes, and Spain.
The station complex includes a bank, shops, ATMs, and left luggage lockers.

The building is the work of the architectural firm Cambridge Seven Associates under the direction of Peter Chermayeff, resembling an Aircraft carrier, and is built in the pier of an internal sea. It is one of the largest aquariums in the world, and has a large collection of marine species - birds, mammals, fishes, cnidaria and other marine organisms.
http://www.oceanario.pt/

The Vasco da Gama Tower (Portuguese: Torre Vasco da Gama) is a 145 m/476 ft high lattice tower, built over the Tagus river. It is named after Portuguese explorer Vasco da Gama, who was the first European to arrive in India by sail, in 1498. The architecture of the tower was by Leonor Janeiro, Nick Jacobs and SOM. The steel structure, representing the sail of a caravel, was assembled by engineering company Martifer.
The tower was built in 1998 for the Expo 98 World's Fair. At the 120 m/394 ft-level, there was an observation deck and, just below it, a luxury panoramic restaurant. At the base of the tower was a three-storey building that served as the European Union Pavilion during the expo.

The dock area below 25 de Abril Bridge along the river in Alcantara between Baixa and Belem is one of the city's most pleasant places for a drink in late afternoon and with a lively atmosphere at night.

Former warehouses overlooking an attractive yachting marina have been transformed into a multitude of cosmopolitan bars, restaurants, and clubs for all tastes.

Those who enjoy walking can also set off from here to the monuments in Belem, through the green lawns along the river (about a 30-minute walk).
Where: Alcвntara/Belem
How: Take the Cascais train from Cais do Sodre Station to Alcantara station, and walk towards the bridge. 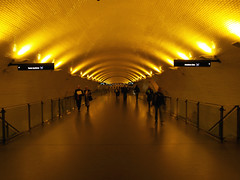 This subway station links the blue as well as the green line of the Metro system in Lisbon. It is one of the most important transfer stations. For the blue line it was the end station for a long time. The extensions towards the Santa Apolónia train station is being built, and expected to be completed in 2007. It is situated at the crossing of the Largo do Chiado and the Rua do Crucifixo.

A building to house the railway control centre of the Lisbon area. It is a highly technical building with a complex control room. Shortlisted project in the World Architecture Festival